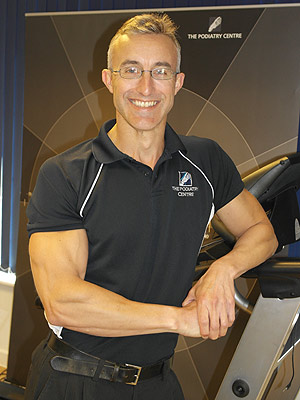 Paul opened The Podiatry Centre in 2004, after working as a private practitioner and clinical specialist within in the NHS locally for 10 years.

In 1998 Paul obtained a post graduate certificate in Sports Podiatry and in 2000 a Masters Degree in Sports Injury and Therapy. Combined with a CertEd from Portsmouth University, he spent a short period lecturing at Southampton University before concentrating on clinical application and post graduate lecturing.

Clinically, Paul works solely within Biomechanics and musculoskeletal podiatry. Having prescribed more than 10,000 pairs of custom foot orthotics (over 7,500 of which were made in his own laboratory) he see patients of all ages and all activity levels. A full time clinician, Paul also has a strong academic background lecturing on the international conference circuit and publishing papers in Podiatric, Physiotherapy and Orthopaedic journals.

Paul has a long history of sports from childhood, including running, sailing, windsurfing, squash, table tennis, cricket, hockey, triathlon, judo and taekwondo. After reaching a midlife crisis, he now competes at drug-free bodybuilding placing top 5 nationally in 2015 and winning the southern counties UKDFBA masters division in 2016. He managers a local colts cricket team, and has five active young sons.